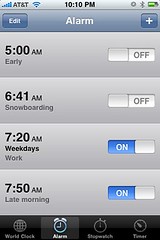 I use my iPhone as my alarm clock.  It works well, and is very flexible.  Unfortunately, the fact that it is as flexible as it is makes it a bit of a challenge as well.  I've got 4 different alarms, one that I tend to use for travel, one for snowboarding, and two for work, as the screenshot shows.  This ease of use though is also why it fails for me.  I used to have an alarm for 8:10 AM as well, and in general, I'd wake up, turn off the alarm, and make sure the later alarm was on.  (The snooze feature is accessed by tapping the screen, while you turn the alarm off by sliding across the screen with your finger.)Obviously, it's not great that I keep using my extended snooze, and I thought I'd correct this bad behavior of mine by deleting the 8:10 AM alarm I had.  Did that help?  Nope.  It's pretty easy to just turn off the alarm at 7:50, select the timer on the bottom right, make sure it's at 15 minutes or so, start the timer, and roll back over for a few glorious minutes under the comforter.

So what's the real workaround?  I'd love to try one of the alarm clocks that wakes you based on your sleep cycle, but they're pretty expensive to buy on a whim.  There's some iPhone apps, but I'm dubious as to how they're going to detect the stage of sleep that I'm in.  I also do not believe that one of those alarm clocks that gets brighter and brighter would work either - I mean, I'd just stick my head under the covers . . .

So, I think I'm going to have to be rudely awakened.  The key though is that it can't be too easy for me to snooze / reset the alarm.  So, being the geek that I am, I think the solution for me would be a clock (or an iPhone app) that would not shut off the alarm until you completed some feat.  It might have a screen and four buttons, where you have to answer multiple choice questions correctly.  For kids in school, this could be great for helping them learn their basic arithmetic, or review SAT analogies.  This would get your mind going, and by the time you finally figured out how to shut it off, you'd be awake and no more snoozing.

Clocky fails since it still encourages at least one snooze cycle - you'd easily be able to hit snooze once before it rolls away . . .
Collapse