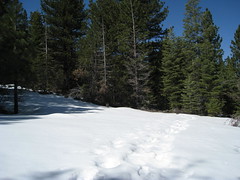 Even though Northstar is going to be open through most of April and I haven't been out near as many times as I'd have liked this year, I couldn't bring myself to head out there today. The weather in Reno was just too nice (pushing 70!) and while my ankle is feeling much better, snowboarding probably wouldn't be that great for it.

Instead, I decided to go on a hike, specifically Hunter Creek. While researching this morning for a hike to do, I did see the same hike here. Seems like it could be a pretty cool site if I had a GPS device. Anyway, I plotted the hike as best I could using my RunningAhead account. 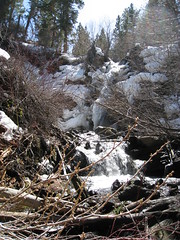 The hike ended up being a bit of a challenge, as the trail disappears in quite a few spots, and in several areas there are multiple trails that run parallel. I ended up taking a slightly different trail on the way back than on the way there. I did run into some people maybe half way, who gave me some advice. It's a good thing I stopped and chatted and asked, since there's no way I would have found the falls otherwise. There's still a good amount of snow for the last half mile or so, and it's impossible to tell where the trail is. It seems a few people have hiked it, but with the various melting and things, their footprints were not always clear. I definitely did some backtracking and exploring of snowy areas, losing and finding the trail. Overall, not too bad of a hike, though there are definitely some craggy spots, and I'm glad I wore my boots. (Though this probably wasn't any better for resting the ankle than snowboarding . . . )

I did get some nice pictures along the way though . . .

Tried to run today and made it a little short of two miles before I decided it probably wasn't too smart to keep pushing the ankle. Boo.

My arm hurts. I think I tweaked it last Thursday lifting, and it's in enough pain to keep me from doing much lifting. Man, my body is just breaking down . . . my ankle, my tricep, etc . . .
Collapse