So, this past Saturday I'm doing the Wine Walk here in Reno with a white, Caucasian female friend. So, w'eve just had some wine at the River Grill, and are heading back north along Virginia Street to head towards some of the other venues.

Now this guy is staggering/stumbling down the street, in full Western get up - Wranglers, cowboy hat and boots, and a Western shirt. He comes up, asks where he can get some sunglasses, lamenting how he lost his yesterday. I tell him it's a bit of a struggle, and it depends what he's looking for, and he says he just lost some Ray Bans. I feel for his loss, tell him that sucks, and says the only thing he's going to find around downtown is some cheap, gas station sunglasses at one of the souvenir stores.

That's fine, and we're moving along, at which point he says to my friend "A girl like you shouldn't be with a guy like him. Gook." I barely hear this last remark, and it doesn't really register, till another guy who was walking by says "Did he really just say what I think he did?" Ridiculous. (The cynic in me was joking about how he at least got the race right.)

Who knows what his problem was - I'd imagine he was slightly drunk, and the sunglasses comment might have been going into some slant/squinty eyes bit, but if he was looking for a fight, it seems like he should have just dug right in, rather than making a comment under his breath while I walked away.

So, you have to love the web sometimes . . . XKCD is a great, geeky webcomic. Getting Out Of Hand mocks the inner geek in all of us that turns to wikipedia when we have questions.

So, checking out the featured wikipedia article, it was temporarily vandalized: 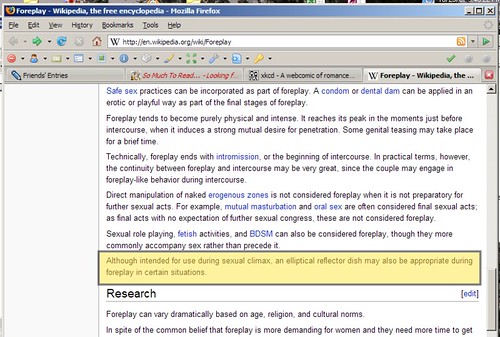 Granted, the vandalism didn't last long according to the revision history (which shows that wikipedia does work at times).